Across a range of sizes from 32 to 750 reproductive individuals, we found that small populations (n < 35, red line) had a significantly lower outcrossing rate than large populations (n > 90, blue line). 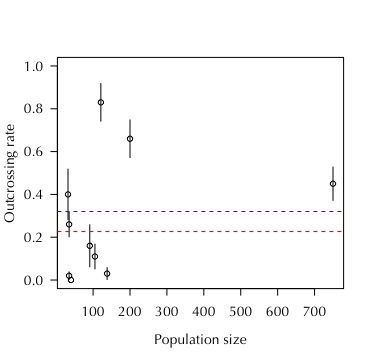 Given the high estimate for inbreeding depression in this species (0.88 ± 0.14), small populations may experience a rapid decline in population-level fitness that can lead to local extirpation. The consequences of human-induced habitat fragmentation suggest that such local extinctions are common due to this demographic effect.